Black Dogs is the name given to a type of phantom hound that appears in many places in Britain. In Suffolk it is known as 'Black Shuck', in Yorkshire as 'Barghest' and in Cornwall as the 'Yeth Hound'. What all these have in common is that they are large, muscular black animals that it is unlucky to see.
Examples of several of these spectres can be found below

In Britain there are several places that are named after spectral dogs that haunt the area and Black Dog Hill in Wiltshire, is one of them.
The story tells how two men fought a duel with pistols over the love of a lady. One was shot and his black dog, seeing his master was fatally wounded, attacked his killer, tearing out his throat.
The lady could not bear the thought of the loss of both her lovers so killed herself. As a suicide, she was buried at the aptly named 'Dead Maids' crossroads to prevent her from returning as some form of spirit. However, the reason the ghost dog should return and not either of the two men is not related.

Cannock Chase in Stafford was designated an Area of Outstanding Natural Beauty in 1958 and is the largest area of lowland heathland in the Midlands. It has many rare animals, including a herd of deer that were probably introduced to the area by the Normans over 1,000 years ago. Its rarest animal is however the 'Hellhound' or 'Ghost dog of Brereton'.
The dog has been described as big and muscular. It has pointed ears and eyes that look like they are glowing. It has been observed many times around Cannock and Huntington. As with all barghests, it is supposed to bring dire misfortune if seen. So maybe this is one of those ghosts that it is not a good idea to seek out.

Peel Castle is now a quiet hotel but was once haunted by the 'Mauthe Doog' as the Manx called it, or 'black dog' to you and me. It appeared as a large, black spaniel with shaggy, curly hair. Although it could be seen anywhere, the Peel Castle ghost's favourite spot was by the fire in the guards room. The guards were so used to it that they accepted its presence as long as they were not alone with it. However, they believed that it was an evil spirit waiting to catch them out so they refrained from blasphemy and swearing around it.

The guard on duty had to lock the castle and deliver the keys to the captain. The way to his rooms was through a passage that went from the guard room through the chapel. As this was where the dog appeared from every evening, it was assumed that this was the dog's lair. No guard would walk through the passageway alone but took someone with him.

Ghost challenged
However, as was inevitable, one guard, being drunk laughed at his friend's fears and said that he was happy to deliver the keys unaccompanied. He said that he would be happy for the Black Dog to follow him because then he would prove once and for all whether it was a dog or a demon.
He went into the passage from where was heard a terrible noise that continued for some time. At last, the foolhardy guard returned looking terrified and very pale. He was unable to answer by word or gesture any of the questions the other guards put to him. In fact, he did not say another word from that time until he died three days later in terrible agony.
The passageway was blocked up and another entrance made and that seems to have laid the Mauthe Doog to rest.
Peel castle website 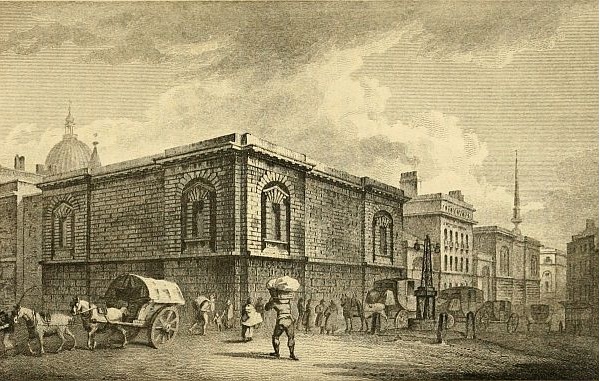 The Prison of Newgate

The notorious Newgate Prison stood near St, Paul's Cathedral until its demolition in 1902. In the years between 1783 and 1868, public executions by hanging outside the prison were a popular form of Monday morning entertainment. The condemned man, woman or child was led along "Deadman's Walk", beneath which their body would later be buried in quick-lime, and onto the scaffold. Hundreds of people turned up either to cheer or to jeer and to watch the poor wretch breath their last. And always, it is said, the Black Dog would appear in the prison on the night before the executions.
Newgate Prison was demolished in 1902 but a sinister black shape has often been seen slithering along the top of the wall in Amen Court behind which once stood the prison and the Deadman's Walk. The apparition is always accompanied by a terrible smell of death.
Incidentally, one of the massive original Newgate Prison doors can be seen in the Museum of London. And but there does seem to be something unpleasant about it.