Animal ghosts often appear with their human but spectral companions. Then there are those, such as the phantom horses that pull phantom coaches or carry ghostly highwaymen, that have a more integral part in the haunting. What all these animal ghosts have in common is that the phantom has a 'supporting role.
However, listed here you will find those ghost animals that make, what you might call, a 'special ghost appearance'. They are the stars of the show.

Any animal,whether it be a cat, a dog, or even a monkey, that we keep as a pet, holds a special place in our heart. When a beloved animal companion inevitably passes to the 'Rainbow Bridge, it leaves a big hole in our life
It is therefore not surprising that there have been many reported sightings of pets that have passed on
Here are just three reports of ghost pets.

Ghost Bear - Tower of London
One of the many repeated animal ghost stories refers to the large bear that was seen in January 1816 by a sentry on guard duty in the Tower of London at what was then the Jewel Tower and is now the Martin Tower. The bear appeared to be real so the sentry lunged at it with his bayonet. The bayonet went straight through the bear and struck the wall behind. The sentry collapsed with fear and died a few days later from shock after telling what had happened.
This apparent over-reaction becomes a little more understandable when it is realised that, at the time of the appearance, the Tower had a menagerie containing a variety of animals, including bears. The poor sentry probably thought it was one that had escaped. The Tower menagerie closed in 1835 and the animals were moved to the then newly built London Zoo

Imagine driving along a quiet country lane when suddenly, apparently out of no-where, appears in your windscreen, a horse. You brake and jump out heart racing, fully expecting to find a dead or dying animal in the road. But there is nothing there.

This can and has happened in several places in Britain that are haunted by Phantom Horses.

Ghost Goose - Melsonby, Yorkshire
The ghost hunter, Elliott O'Donnell tells of a farmer who was driving in a pony and trap along the road in Melsonby when his horse suddenly shied and bolted. The farmer wrestled with the reins and finally got the horse under control although he was still travelling very fast.
At a loss as to the reason for the horse's sudden fear, he saw beside the trap what appeared to be a large white goose waddling along the road the way geese do yet travelling over the ground as fast as he was. When they reached the church-yard, to the farmer's immense relief, the goose turned in through the closed and locked gates.
This spectral bird has been seen by several people on a number of other occasions.

Chicken Ghost - Highgate Pond, London
There are some very odd animal ghosts and this must count amoungst the strangest. In fact, when I recounted the story to a friend, he answered, 'Yeah, right. Here's my leg. Now pullet!' And as befits the spectral creature, it has its own Highgate Chicken Ghost page.

Pig of Plenty - Isle of Man
There are a few animal ghosts that are supposed to bring great fortune to the observer and this is one such that you would do well to look out for if you are ever on the Isle of Man. It is called in the Manx language, Arc-Vuc-Sonney which means, 'Pig of Plenty'. It can sometimes be seen on fine, moon-lit nights. If it crosses your path then try to keep it in sight for as long as possible and it will bring you good luck. It is said to be fortunate even if you just catch a glimpse of it.

Ghost Pigs - Merripit Hill, Dartmoor
Merripit Hill is where phantom sow and her litter of piglets has been sighted. They are traditionally said to make there way to Cator Gate where there had been the carcass of a horse. But when they got there, the crows had picked the horse clean and all that was left were bones and skin. So the starving pigs returned to Merripit Hill.
Incidentally, in a few years it may impossible to tell these animal ghosts from their more physical cousins! After being hunted to extinction 300 years ago, Britain now once again has a population of wild boar. I rather like the idea of the return of this indigenous species to the countryside. 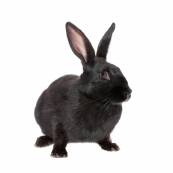 Ghost Rabbit - Thetford Warren Lodge
The Lodge was built in the 15th century by monks from the nearby Cluniac priory for the person who looked after the rabbits in the Westwick rabbit warren. In those days, rabbits were an import source of both fresh meat and fur and they were farmed much as we farm sheep. And the animal ghost that haunts here is a white rabbit. It has been seen several times, hopping around near the building. A ghostly reminder of the history of the area.

Phantom Dogs - Nationwide
You will find an account of a ghostly pet dog in Ghost Pets
However, there is a category of phantom that can only to be found in Britain. They are known as Black Dogs and they can all be found on their own special page.

Well, that's all the animal ghosts I have for you now. But check back regularly as I have information on many more.