Legend of the Screaming Skull 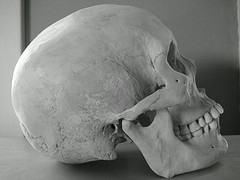 The legend of the screaming skull seems to be peculiar to Britain. Although the stories regarding the origin of the skulls varies, the problems that follow when the haunted skull is moved have much in common. This includes 'bad luck', poltergeist activity and blood-curdling screams.
At least one of the skulls has been professionally examined and it was found to be considerably older than legend suggests. So maybe, the stories of most if not all of the screaming skulls were made up to explain an otherwise inexplicable phenomena.

Bettiscombe Manor, Bettiscombe, Bridport, Dorset
(Not open to the public)
The story goes that a certain 'Azariah Pinney' who lived in Bettiscombe Manor was banished to the West Indies in 1685 for some activity connected with the English Civil War. Somehow he managed to make his way back to England, bringing with him an African slave.
This poor man's life was very unhappy and mercifully he did not survive very long. His dying wish was that his body be returned to his native land. This was never done and he was buried in the local church-yard. Immediately, groans and other terrifying noises were heard coming from the grave and Azariah was forced to remove the corpse from the grave. He stored it for a time in the attic and over time the body crumbled until all that remained was the skull.
Many attempts have been made to remove the skull, it has even been thrown into a pond, but each time it has had to be returned to the house of account of the screams and groans that are heard in the house.
So much for legend. In 1963 the screaming skull was examined by a pathologist. It was determined that the skull was actually between 3,000 and 4,000 years old and was from a European woman. Some think that it could have come from the Iron Age ritual site at Pilsdon Pen which is situated near the Manor house.
Unfortunately, the house is not open to the public

Burton Agnes, Driffield, East Yorkshire, YO25 4NB
Burton Agnes Hall was built during the reign of Queen Elizabeth I by three sisters, the daughters of Sir Henry Griffiths. Unfortunately, before it was completed, one of the sisters, Anne, was attacked. she was stabbed and fatally wounded. Before she died, she made her sisters promise that her head would be removed from her body and always be kept in the hall. Not surprisingly, this was not done.
After the newly built hall was completed, it was plagued with 'strange moaning and weird sounds' until the poor sisters could bear it no longer. When they visited the family vault in order to carry out their sister's death-bed request, they discovered that her head was now just a skull and, conveniently, it was separated from the rest of the torso. The skull was taken to the hall and peace returned
However, a servant, not believing the story, threw the skull onto a passing wagon, whereupon the horses reared in fear, the hall trembled and pictures fell off the walls. So the screaming skull was replaced in the hall. Eventually the skull was bricked up in the wall somewhere within the house for safety.

Calgarth Hall, Windermere, Cumbria
(Not open to the public)
A Justice of the Peace by the name of Myles Philipson who owned Calgarth Hall in Cumbria wanted the land which was owned by a local couple to add to his already vast estate. However, they refused to sell. Determined to get the land by whatever means necessary, he invited them to a meal on Christmas Day saying that he no longer desired the land and wanted to show that there were no hard feelings. While they were enjoying the meal, a silver cup was hidden on them. Next day, soldiers arrived at their farm and demanded to search their humble home. Of course the cup was found and they were arrested.
There was a trial but as Philipson was the Judge in the case, the outcome was a inevitable. The couple were found guilty sentenced to hang.
On the scaffold, the woman uttered a terrible curse on the Philipson family.
"Hark's to here, Myles Philipson, that teenie lump o' land is t'dearest grund a Philipson has ever bowte. For ye shall prosper niver maur, yersl, nor yan of o't breed. And while Calgarth's strong woes shall stand, we'll haunt it day and neet."
Shortly after the couple's death, two skulls mysteriously appeared at the Hall. And every night, terrible screams were heard. Many attempts were made to dispose of the skulls but, whatever method was used, the skulls always found their way back to the Hall.
Philipson himself, never prospered. He lost all his money and his health failed. After his death, the Hall passed from the ownership of his family and everything became quiet. The screaming skulls were eventually bricked up somewhere in the Hall where they remain to this day.

Higher Chilton Farm, Chilton Cantelo, Near Yeovil, Somerset
(Not open to the public)
During the English Civil war, Theophilus Brome, had originally been a staunch Royalist. However, so appalled did he become of the way in which the King's Troops treated their prisoners that he defected to the Roundheads.
After the War ended and King Charles II was restored to the throne, Theophilus lived quietly at High Farm with his sister. But he feared that, upon his death, his head would be disinterred and put on public display as a traitor to the King.
Thus is was that he made his sister promise that his skull would to be preserved in the house for all time. This promise his sister made every attempt to fulfil. When he died, his head was removed from his body and kept in the house.
Eventually the sister died and the farm had a number of tenants. Several attempts were made to dispose of the cranium but whenever this was done, the most frightful screams were heard in the house accompanied by poltergeist activity. And so the screaming skull now sits in a special cabinet over a door in the hall.
Brome's tomb can be seen in St. James' Church, Chilton Cantelo and although there is no mention made in the tomb's inscription, there is some circumstantial evidence that suggests that there is some truth to this screaming skull legend. During restoration work on the church, the tomb was opened and Theophilus' skull was found to be missing!

Tunstead Farm, Chapel-en-le-Frith, Derbyshire
(Not open to the public)
There are two stories as to the origin of this screaming skull, which is know to its friends as 'Dickie'. The first is that it belonged to a man who was murdered by his cousin at Tunstead Farm in the room where the skull is now kept. The murdered man was called Ned Dixon, hence the nickname 'Dickie.
The second story is that it belonged to an unnamed womam who was murdered at the Farm and who, with her dying breath, requested that her mortal remains not be buried but that they be kept at the farm. Over the years, the rest her body has been 'lost' so that all that now remains is her skull. This might be the more reasonable story because Tunstead Farm is also haunted by a woman who is looked upon by the occupants as a sort of 'guardian'.
There are the traditional stories about attempts having been made to dispose of the object. It is said to have been stolen and to even have been buried in consecrated ground but each time the disturbances at the Farm and also in the vicinity of the skull were such that it had to be returned.
So what are we to make of it. Working on the assumption that all legends have a vestige of truth, it would appear that the skull belongs to a murder victim. However, as to who they were, it is unlikely that we will ever know.

Warbleton Priory ruin, Rushlake Green, Heathfield, East Sussex
(Not open to the public)
The former priory is now in ruins and is situated within the area covered by a modern farm. But hidden within its walls somewhere is not one screaming skull but two. One is supposed to have belonged to a Prior who was murdered. The other skull belongs to his murderer. The usual mayhem is said to have followed any attempt at their removal from the Priory.
However, there is a lovely story concerning them. Apparently, at some time prior to being bricked up, they were placed in the branches of an apple tree for some reason. A blue tit took a liking to one of the skulls and built its nest in it. The bird used the eye sockets as entrances to this rather unique 'nest-box'. I can only think that the screaming skull approved of the use to which it was being put and remained silent.

Wardley Hall, Worsley, Greater Manchester
(Not open to the public)
That there is a skull at Wardley Hall, is not disputed. The original owner of the skull is even known. However, whether or not it is a screaming skull, that is, does it actually scream is, as they say, another story.
The cranium belonged to a Catholic priest, Father Ambrose Barlow who was hanged, drawn and quartered in 1641 for his faith. His head was then put on display at Lancaster Castle. The skull was taken to the hall by a Catholic sympathiser and hidden, only to be rediscovered in the 18th century. It is now preserved in a specially built niche at the top of the hall's main staircase.
That is the accepted history of the alleged 'screaming skull'. Legend, however, expands upon the known facts. It is said that a servant threw the relic into the moat whereupon a terrible storm arose. The owner of the hall realised that the skull was angry at being removed. He had the moat drained and the skull placed in the hall where it is today, well out of the reach of anyone else who may wish to get rid of it .