The Phantom Butterfly of Bath 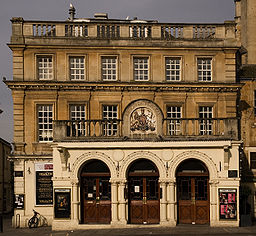 The Theatre Royal, Bath is home to the so-called, 'phantom butterfly'. Although it is not spectral, the phenomena definitely seems have a supernatural element. In England, one does not normally see a butterfly during the freezing cold winter month of December.

At Christmas time in 1948, a new pantomime was being rehearsed in the theatre. The director, Reg Maddox, planned for a spectacular Butterfly Ballet scene to be included and had build a large butterfly set piece which would be used. One day a dead Tortoiseshell Butterfly was discovered on stage. Shortly after, Reg Maddox died and his son, Fred, took over as director.
Fred decided that he would drop the ballet scene that his father had so meticulously planned. From then on, nothing seemed to go go well with the production.

Then, during the rehersal one day, a live Tortoiseshell Butterfly was seen flying round the feet of the dancers. At this point the production's fortunes suddenly improved and the show went ahead and was a great success.

Now, it is said that a live butterfly is seen on stage at some time during the run of every successful pantomime. The most famous occasion was in 1979 the phantom tortoiseshell phenomena was witnessed by hundreds of people including hard-headed journalists. Leslie Crowther was playing 'Wishee Washee' in a performance of 'Aladdin', when a butterfly alighted on his shoulder during a performance. After the panto was over, Leslie Crowther went in front of the curtains and told the audience the 'Butterfly Story'. The butterfly set piece can still be seen in the theatre's fly tower where it is kept as a reminder of the story of the 'phantom butterfly'.