All things considered, it is not really surprising that the ghost of Captain Kidd has been spotted in the lanes alongside the River Thames, near the Town of Ramsgate pub and at the nearby site of Execution Dock. Despite the stories told about him, he was far from the swashbuckling pirate of legend but was a rather sad character who probably did not deserve his ultimate fate.
For, on 23 May 1701 at Execution Dock, on a scaffold built beside the River Thames below high-water mark, he stood on the back of a cart with a noose around his neck. Beside him were three other men who were also convicted of piracy. The cart drew away leaving Kidd's companions convulsing at the end of their ropes. However, the rope bearing Kidd broke. He fell into the thick, fithy Thames mud getting covered in the stuff. He was roughly dragged back to the scaffold as the onlookers jeered. A second noose was quickly fashioned. This time, the hanging went without a hitch. 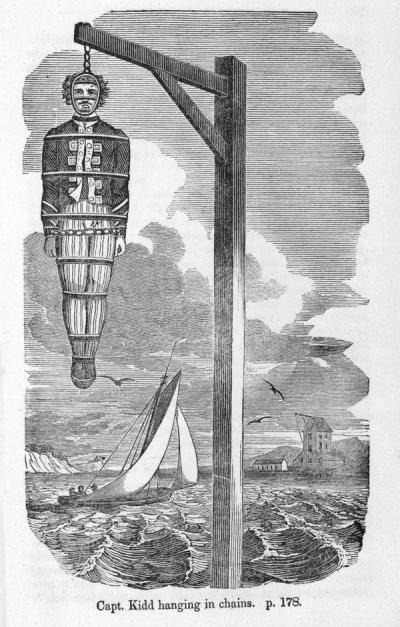 As was the custom, the dead men remained hanging until three tides had washed over them and only then were they pronounced dead and cut down. Kidd's body was covered in tar and was then hung in an iron cage at Tilbury Point as a warning to other would-be pirates. There the rotting corpse remained for several years until birds had pecked off all the flesh. The Captain Kidd's ghost is also supposed to be seen across 'the pond' on Gardiner Island near New York in America where he buried much of his loot. However, his appearance there is probably just a legend.

Return from Ghost of Captain Kidd to Haunted London