Haunted churches can be found throughout Britain. But London does seem to have more than its fair share as I think these reports will show. Not only that but a surprising number of them were built by Sir Christopher Wren.

All Hallows by the Tower, Byward Street, EC3R 5BJ
This, one the the many haunted churches in London is also the oldest church in the capital city. It was founded in 675. In the Middle Ages, it was often used as the temporary resting place for the mortal remains of those unfortunates who incurred the Monarch's displeasure and who, as a result, lost their heads on nearby Tower Hill. Those, that is, who were not buried in St. Peter ad Vincula. However, it is no headless spectre who haunts this place of worship.
In 1920, the choir was practicing Christmas carols when they noticed an old grey haired lady in old fashioned clothes standing looking at them intently. One of the choir boys offered her a chair which she acknowledged with a nod of thanks. The choirmaster thought it was strange to see the lady as he believed that he had locked the church door. When choir practice finished, they saw that the lady was no longer sitting on the chair. A search was instigated but she was no-where to be found and church doors were still securely locked.
Maybe the old woman has found rest because although she was seen on several other occasions, she has not put in an appearance for some time.
Haunted churches don't normally have animal ghosts but here you will find details of the one in this church.

St. Bartholomew the Great, West Smithfield, London, EC1A 7DQ
One of my favourite haunted churches in London is also the second oldest. It was founded in 1123 by Rahere, who is said to have once been the pious jester to King Henry I. While on a pilgrimage to Rome, he received a vision of St. Bartholomew who instructed him to build both a church and hospital at Smithfield. This he did as soon as he returned to England and thus was started both St. Bartholomew's Church but also St. Bartholomew's Hospital.
Rahere became a monk and is buried inside the church in an ornate tomb of which he would most certainly have disapproved. Maybe this is the reason that his cowled figure has been both seen and heard many times within the church. He usually stands near the altar but at other times he has been spotted walking towards the Lady Chapel.

St. James Garlickhythe, Garlick Hill, London, EC4V 2AL
Another of the City's haunted churches, St. James church was rebuilt by Sir Christopher Wren to replace the original building that was built in 1326 and which was destroyed during the Great Fire of London in 1666.
In 1839 a naturally mummified body of an adolescent who probably died at the end of the 18th century was found buried in a glass panelled coffin. The mummy used to be on public display but although it is still in the church, it has recently been hidden away from prying eyes. It is assumed that it is the ghost of this young man, affectionately known as, 'Jimmy Garlick ', who has been seen many times in the church. Unexplained noises are also heard and objects have been moved.

St. Nicholas's Churchyard, Church Street, Chiswick
The ghosts of two of the daughters of Oliver Cromwell, Mary Fauconburg and Frances Rich appear both dressed in white in the churchyard of St. Nicholas at dawn and disappear into the walls of the church.
It is widely believed that when the body of their father was disinterred from its burial place in Westminster Abbey at the Restoration of the Monarchy and hung in chains at Tyburn, the daughters of Oliver Cromwell bribed a guard, took their father's corpse and had it secretly placed in the family vault at St. Nicholas where they would later be interred.
Unfortunately, St. Nicholas church was rebuilt in 1882 and the vicar decided to investigate if there was any truth to the story. Instead of finding the two coffins he expected, he found three, one of which was very battered. Fearing that, if it were Cromwell's coffin, sightseers would disturb the quiet of the place, the vicar bricked up the vault and now there is no record of where it is. It is the fact that they now effectively lie in an unmarked grave that seems to have upset the two sisters and causes to them to haunt the churchyard. 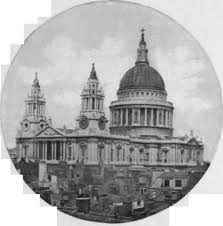 St. Paul's Cathedral, Ludgate Hill, London, EC4M 8AD
The most magnificent of all of London's many haunted churches, we rightly think of St. Paul's Cathedral as being the greatest masterpiece of that prolific church builder, Sir Christopher Wren. However, the site has been sacred for thousands of year and on the hill upon which the church was built was once a Temple to Diana. Any ghosts from the pre-christian era though have long since vanished and it is an unknown clergyman who is sometimes seen.
The 'Kitchener Chapel' is haunted by 'Whistler', an elderly clergyman in old-fashioned clerical garb with long flowing grey hair. Before he makes his appearance, a chill is felt. The spectral vicar then appears and drifts across the chapel, sadly and tunelessly whistling to himself all the time until he disappears into a wall to the right of the chapel gates.
Oddly enough, when workmen were doing work in the church, they uncovered a secret door at exactly the place the ghost vanishes.

Westminster Abbey, London, SW1P 3PA
As befits a place of worship within the walls of which so many of the rich and famous are interred, Westminster Abbey is another of London's haunted churches. But if you are looking for the ghost of a 'royal' or 'aristocrat', you will look in vain. The two ghosts for which the church is known both have very humble origins.
'Father Benedictus', is the name that has been given to the tall, lean and cowled figure who is sometimes seen. He is said to be a monk who was killed in the Abbey at the Chapel of Pyx during the reign of Henry VIII. Father Benedictus appears in the cloisters around five or six o'clock in the evening, floating slightly above the ground as the floor level is lower than it was during his life-time. He has been known to hold a 'very polite' conversation with witnesses before silently vanishing into a wall.
Westminster Abbey also has a far more recent ghost. A soldier in the uniform of a World War One infantryman appears beside the grave of the Unknown Warrior. He stands for a few minutes with his head bowed in respect and then slowly disappears.

St. Botolph, Aldgate High Street, London, EC3N 1AB
The story goes that in 1982, a photographer was working alone in St Botolph's Church when he took what has been described as one of the most famous ghost photos ever. If the picture was taken as reported and the photographer was indeed alone, then St. Botolph must be one of the very few haunted churches for which there is any tangible evidence.

St. Peter ad Vincula, Tower Green, EC3
Called by the poet Thomas Macaulay,'the saddest spot in Christendom', the Chapel of St Peter ad Vincula stands within the grounds of the Tower of London. One of London's most famous haunted churches, it was the place where those executed within the Tower were buried during the Tudor period. Over two hundred unidentified bodies were discovered when the floor was taken up during the reign of Queen Victoria.
One body however was described as, 'a woman of excessively delicate proportions'. There was a tragic Queen of whom this was a perfect description. The discovery confirmed that the ghost of Anne Boleyn was indeed the identity of one of the phantoms which have been seen in the church.

St. Magnus the Martyr, Lower Thames Street, EC3R 6DN
This is another of the many haunted churches rebuilt by Christopher Wren after the Great Fire of London in 1666. However, the tomb of Miles Coverdale, the man who gave us the first English Bible and who died in 1535, can be found in the haunted churches south east corner. Many visitors report a great feeling of sadness when near his tomb.
A ghostly figure with black hair and wearing a serge cassock with a cowl, has been seen on several occasions both near the tomb and in other places in the church. A church worker, a rector and a rectors wife all testified that the church was haunted. Churches don't normally admit to playing host to anything supernatural. Miles Coverdale was rector of the original church before he became Bishop of Exeter so perhaps it is him keeping a spectral eye on things.